If you’re like most people, you just leave a $1 tip at the end of the day and go about the rest of your day like nothing happened. Or you don’t even tip at all and wonder why you’re not getting good service the next time you go to the bar.

Not that you’re obligated to tip; in fact, tipping isn’t as prevalent in the rest of the world. In the US, however, many bartenders depend on tips to make a living because they get paid less than minimum wage.

So it’s important you know how to tip, when to tip and when not to tip. In this article, you’ll learn all about the unspoken rules of tipping.

How do you tip at a bar?

You can tip big on the first round without attaching any strings, tip 20-25% of the total after-tax as a general rule of thumb, tip differently for every type of drink you buy and not $1 for all, tip extra for excellent service, etc.

Stay with me as we break down these tipping etiquettes and so much more.

10 Unspoken Rules About Tipping at a Bar

Tipping at a bar can be a tricky subject. On the one hand, you want to make sure that your bartender is taken care of and gets a good tip for their services. On the other hand, you don’t want to over-tip and end up spending more money than you need to.

Here are 10 unspoken rules about tipping at a bar.

1. Tip Big on the First Round

Tipping big (50% upwards) on the first round of drinks you buy makes a great first impression. It makes your bartender excited to serve you and can even strike up a conversation.

However, most people who tip big expect their bartenders to grovel at their feet. It’s important to note that tipping big on the first round doesn’t equate to better service.

You’re not buying the bartender’s affection with a big tip. If the bar is busy, for example, don’t expect preferential treatment when they have other people waiting in line.

You’re doing it for the good of it without expecting anything in return. If the bartender sees you’re humble enough to wait in line, you’ll score points.

If you’re unsure how much to tip at a bar, go for 20-25% after tax. And if you feel the service didn’t meet your standard, 15%. Although most people tip 20% as an unspoken rule, it simply won’t cut it in today’s economy.

Bartenders work so hard, and even though you see it as only mixing drinks, much more is happening behind that counter than you can imagine.

However, this depends on your relationship with the bartender and their service.

Use these questions as yardsticks for tipping.

3. Tip Differently for Every Drink Type

You don’t tip the same $1 for a cocktail. The energy required to make a cocktail just isn’t the same as that required for a simple beer.

Try tipping differently for every different type of drink; your bartender will appreciate you for it. $1 for a beer, $2 for wine, $3 for a cocktail, etc. The more time it takes the bartender to prepare your drink, the more you should add to the tip. If you’re still unsure, you should follow the 25% rule.

4. Tip for Every Drink

Some people invite friends for drinks and then tip $1 at the end of the day after multiple drink rounds. That’s not how things are done.

If you’re paying in cash, you should tip for every drink you buy, regardless of how many you’re buying. $1 per drink will suffice if you’re drinking multiple rounds, and $2 if you get exceptional service. If you’re paying with a card, however, tip 20-25% of your tab after tax.

This seems like a no-brainer, but it must be said. If your bartender served you quickly, served the right proportions in your mix, or served you with a smile, then you should consider tipping well.

Of course, this is up to you, and sometimes it can feel like bartenders are putting on a smile just because of the tip. It’s the bartender’s job, however, to ensure you get the best possible service, and if you get that, then they deserve a good tip.

Not only will you make the bartender’s day, but you’ll continue to get that exceptional service when you come back.

Even if you plan to use a card, bartenders prefer you tip in cash. Why? Because most people cut back on the tips when the tab gets too large.

So, if you have some change with you, consider giving that as a tip instead of adding it to your tab.

7. Tip Even if You Hate the Bartender

Don’t tip emotionally. If the bartender’s service is exceptional, but you don’t like them for some reason, you shouldn’t hold back on tips. If you hate the bartender, don’t order from them. If you keep ordering, however, you should tip appropriately.

8. Tip Well Even if You’re Getting a Discount

The 2-for-1 special isn’t an excuse to tip poorly. Let’s say you’re ordering 6 drinks at $3 each. That’ll be $18, but the bartender decides to give you one drink on the house, leaving your total at $15.

If you wanted to give a tip of $1 per drink, leaving your total before the discount at $24, but you slash your tip and pay $18 total, that’s wrong. In this imaginary scenario, pay $21 upwards. They’re giving you a discount on the drink, not the tip.

There’s no actual rule governing tipping during discounts, but you should try to cover up the discount as much as possible. If you get 2 drinks for the price of one, tip for the 2 drinks.

9. Don’t Wave Your Money Around

If the bar is full, and you’re waving your money around in hopes that the bartender will suddenly give you preferential treatment and serve you first, you’ll be waiting a long time, I’m afraid. They see you and do everything they can to get to you.

If you’re not tipping a bartender for some reason, maybe poor service, don’t just leave without saying anything. This will give the bartender room to make assumptions about you and your personality.

If you’re not tipping, make it clear to the bartender why you didn’t tip. This feedback is important because the bartender will learn from the mistakes they made with you. Not only are you helping the bartender improve, but you’ll also be ensuring better service for those coming to drink after you.

In most bars, the tips don’t go to the bartenders alone. Some have a tip jar where they keep all the tips to be distributed according to how much work someone did later. While some automatically give the management half of all the tips.

Regardless of how they do it, don’t hold back on tipping generously because you think it’s all going to the bartender.

It’s not the bartenders’ fault they’re paid minimum wage, tipping is simply the symptom of a dysfunctional economy. Remember to tip for every drink and tip more for complex cocktails. Tip extra for exceptional service and even when you’re getting a discount. 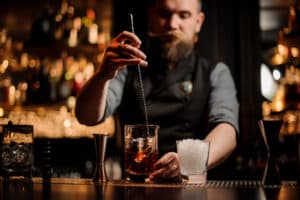 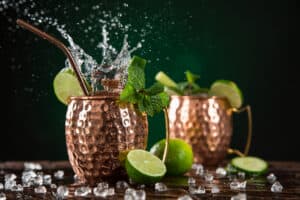 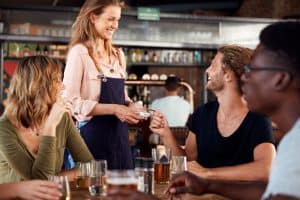 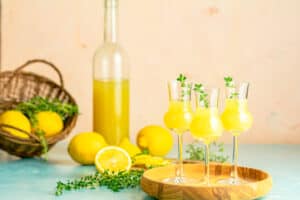 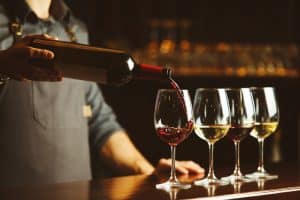 The Complete Guide to Opening a Wine Bar 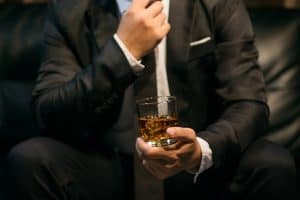 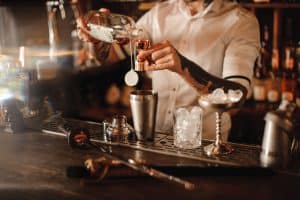